Thank you for your patience while we retrieve your images.

Pomegranate: In Between Worlds

Pomegranate: In Between Worlds
The first time I stepped outside my apartment in Barcelona after 52 days of total confinement, this image of a pomegranate came to me. In Greek mythology, Persephone was kidnapped by Hades, the god of the underworld. After eating some pomegranate seeds, she was bound to live in the underworld. Long story short, a compromise was reached, and she came to live on Earth during spring & summer and return to the underworld for fall & winter.
▫️
That day in May when I stepped outside my apartment, I tasted freedom again and wondered how I would go back inside for many more weeks. It was like I had eaten some proverbial pomegranate seeds. Best case scenario: I would be evenly split between staying inside and going outside.
▫️
There’s a difference between staying quiet and supporting anti-racism. They are two distinct camps, worlds apart. I think my parents gave me some type of pomegranate seeds a long time ago when we arrived in the US from Japan. From that point on, I would never stay in just one country or continent. I would never only speak one language or believe that one nationality, ethnicity or race of humans was entitled to less or more. But racial inequity exists everywhere, and I too, have fallen prey to having the wind knocked out of me consistently. It’s lifelong and ongoing. It’s deflating, dehumanizing and kills confidence.
▫️
Maybe you’ve eaten some pomegranate seeds at some point. You’ve experienced other places and worlds. I do believe we are gifted responsibilities along the way - to empathize with and stick up for the human beings we meet. This is a great time to ponder what those gifts in our lives may be and what actions they ask of us. 8x8x1.5 in / 20x20x4 cm. Acrylic, oil stick, nail polish, metal leaf & powder, patina and wax on a cradled wood panel with a depth of 1.5 in / 4 cm. June 2020. SOLD 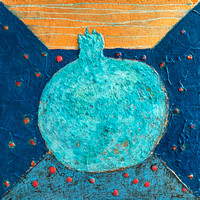 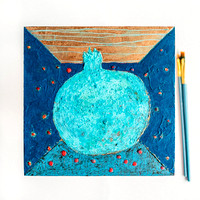 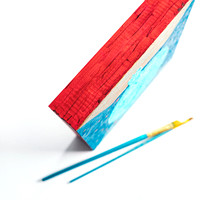 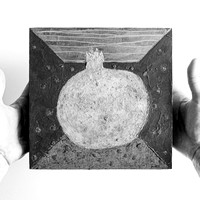 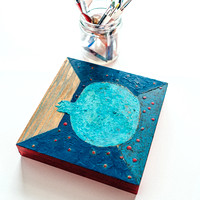 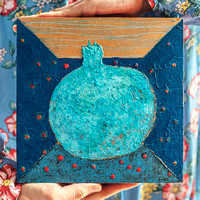 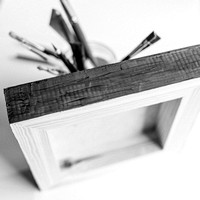